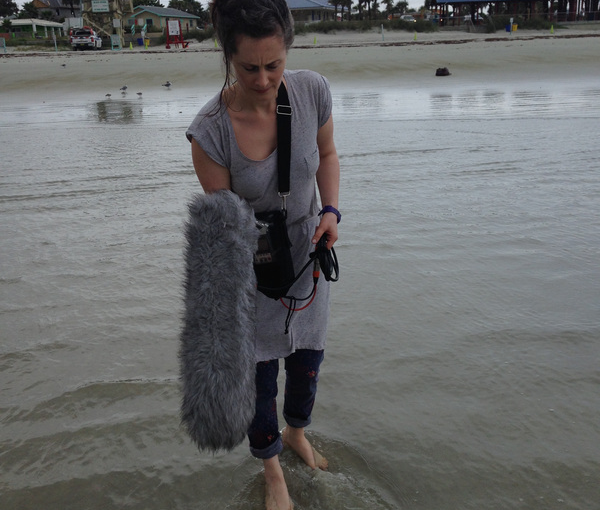 Harry Matthews (HM): Have recordings always been a significant part of your creative process?

Brona Martin (BM): I only got into it when I started studying music. I did a higher diploma in music and one of the modules was ‘out of sound’ or something. At that point I was introduced to Viv Corringham who does soundwalks. They’re very personal soundwalks and she has a different way of doing them compared to say Hildegard Westerkamp, but basically it was all down to place and peoples experience of place and that’s what I found really interesting. So, for one of my projects I created an art installation, I was trying to recreate that sense of being by the sea, with a background recording with my cousin who is a zoologist. She was discussing the different types of sea life that live on the rocks and it was about her favourite place, and there was this beach that was her favourite place. [On the recording] she was saying why and how interesting it was and you could hear the wind and you could hear the waves. So that was my first step into it I suppose.

HM: So recordings helped you interact with your environment?

BM: Yeah. And I think that was my first step before I even knew soundscapes were a thing.

HM: A lot of your work exists as studio recordings. Do you find that when an audience listens to your compositions during a live concert setting, as opposed to listening at home, that their perception of the work changes?

BM: That’s a really good question. Yeah I think first of all, the format it different in the concert because it’s going to be multi-channel. So…it is a far more immersive experience than being at home and listening on headphones. Also, in most of the electroacoustic concerts I perform my music in, even if the work is stereo or eight-channel, the pieces are projected on an orchestra of loud speakers, so the room is filled with 48, 50 or up to 100 speakers depending on where I am. So that is allowing me to create an even bigger hyper-real soundscape with the audience in the middle. I think [at home] they still get the gist of the piece, but I think in the concert environment you can really really immerse the listener into it and make the soundscape more realistic and more believable because you are moving the sounds around in a bigger space. So you can enhance the overall trajectory, whether it’s moving left to right, above or below you. Which is cool.

HM: You will perform Sowing Seeds at the SHIFTS concert at Turner Sims on 27th January. This piece has a fascinating blend between recordings that sound like momentary interactions, performance material and audio manipulation. I’d like to know about your creative process and how did you select the material for this piece?

BM: There was me, and there was the Vonnegut Collective, Jemma (Violin) and Gary (Trumpet), and participants from this wellbeing centre, in Manchester, where people with different issues and problems in their lives go here to engage in creative activities and meet people.  I had 8-10 participants and I introduced them to soundscape composition and started getting them to think about their environment and things that stood out or meant the most to them. A lot of them had grown up in Manchester…so they were able to tell me a lot about industrialisation and how things have changed over time, like construction, how the place has changed over time. We looked at examples and then we went outside and they all had a recording device. I wanted them to record sounds that they noticed or found interesting, and each of them just went on their own personal creative expedition. For example, one guy made his own instrument, and he was playing with that. Then another girl started to improvise with the environment and the objects around her. When you listened to her recording it almost sounded like a complete piece.

There were some conversations that I recorded that I found really interesting. I basically had a folder with each person’s name on it, and I made a sound library with that, which was divided into recordings ‘in the park’ or ‘conversations’ so they could easily find different recordings…

We went to a small park that had these tubes, you know, the tubes that go into the ground and you can sing into them, you’re on either side of the park and you can hear each other. We were recording there, and loads of amazing things happened, this guy started singing into it and I think he actually made the song up but he was just singing into it and it was so beautiful. Another girl was singing, and she British Iranian, so she had loads of different musical experiences that she brought and she was singing into the tube and it just sounded amazing.

So that guy, he opens the piece. I was trying to do a portrait of each person, a special sound experience that happened. Yeah it’s divided into three, clearly, but for time constraints I couldn’t do a portrait about everyone, so I picked some of the scenarios that I found sonically interesting but also very special.

HM: I find it interesting that you gave these students the tools to make their own recordings. Then you’ve taken their recordings as tools for your work. I think that’s a really nice way of composing.

BM: Yeah, it is. First of all, I wanted to be on the same page as them, you know, the same level, we would all share, and I would share my recordings. In terms of time constraints, it also gives them more material to work with. They’ve only had possibly two hours of recording time. They might want to use other material, or they might listen back to other peoples recording and think, ‘WOW, that’s amazing’ and ‘how did you do that?’ and ‘I didn’t know that sound existed?’.

HM: You mentioned how the recordings were collectively compiled into a sound library. What are your thoughts on composers sharing these materials on a larger scale? I’m interested because I once read somewhere that Hildegard Westerkamp thought it was important to have a connection with the recordings she uses, however, with the now vast amount of material to be freely assessed online should composers also be exploring these options when creating new works?

BM: There are two things there. The first thing is that, when I write a piece that is very place specific, kind of more so than this one, I make recordings and then I put them in a sound library. I’m only allowed to use these, I restrict myself and I only use those recordings for that piece. So even if I think, oh the sound of thunder or the sound of something might be useful here I’m not going to go to freesound and download it. For those types of works that are very place-specific I have to have recorded the sound – or I have to have some kind of relationship. However, there is a piece I’m doing [called] Florida Soundscape Body of Works and one of them I’m going to use frog recordings that I didn’t record, but my friend did. They were on the residency with me, and I know where they were recorded and I’ve been to the place. I suppose I feel, in terms of this work Sowing Seeds, I do have a connection to the recordings, as I was there when they were made. When I listen back, I can see the person and I can see the place, and I know exactly where it was recorded and possibly how they did it…

HM: Do you think finding material this way would result in a less ecological or interactive aesthetic or not?

BM: For me as the composer, yes. For the audience, they obviously don’t have the same connection to the recordings that I have made.

HM: Is there anything you do as a composer to try and bring that connection to the concert hall?

BM: I suppose, the integral context of the piece and what was happening at the time, and the reasons why I’ve done it – the use of spoken word has been really useful in reinforcing the overall context of the work, so I have done that.

HM: Is that spoken word in the piece, or as a programme note?

BM: No it’s in the piece, it’s audio. Like interviews or conversations.

HM: So you use language as almost a describing factor for where your sounds have been taken from.

BM: Yep. It depends. When I do community engagement stuff and when I’m working with other people. I like to make sure that they’ve been heard on the work as well. Because it’s been a joint effort and they’ve inspired me and I’ve inspired them. So, if you look at the work that I’ve done, like the spoken word works, they were where I did workshops at home. I brought people on a soundwalk and the community engagement stuff just throws up so many different scenarios and opportunity and it makes me think outside the box. Whereas when I’m on my own and I’m working on a piece that’s just, you know, I go out and I do the recording ad I’m solo, just by myself, the work is an in-depth exploration of that soundscape.

HM: Moving away for a moment from recorded sounds for a moment. Can you envisage your electroacoustic works involving live performance or live manipulation of sounds at some point? Is this something that interests you as a composer?

BM: Absolutely. I just have to figure out a way of doing it. I don’t want to be just doing it live and triggering sounds. I need to figure out what software I would use, I kind of need to design a live performance patch or something.

HM: Well if you figure it out please let me know!

BM: Hahaha, maybe we should collaborate [This is in writing now Brona]. Actually, I do think it would be easier if I did collaborate going live. I think if I was to do something live, I would incorporate visuals or live performers. Multi-media maybe. I just need the time, but it definitely does interest me.

Also, if you’re processing sounds live, obviously the work is never going to be the same again. Whereas if you’re playing an electroacoustic piece, okay the acoustics of the environment change and that can change the piece, but you’re still playing the same recordings and processes. So I think performing live can change how the piece is interpreted.

HM: For my last question what are you up to at the moment and what about your plans for the future?

BM: I’m currently working on the second work of the Florida Soundscape Body of Works. The first work explored the night-time soundscape of crickets and then the next one is going to be looking at the sounds of frogs. I’m also trying to find the time to experiment with ambisonics and 3D spacialisation. I’m hoping to go to Sweden again, to the electroacoustic studios in Stockholm, to do some work there. That’s where I wrote my last piece so I’d like to go there again, I find it hard to focus at home. And I’m thinking about doing this stuff live and that’s about it for the moment.

The interview was conducted by video chat on 16 January 2019.